How do you efficiently capture something about as big as a truck being sporadically hand assembled over a period of one year?  This is a question I recently faced when setting up time-lapse cameras on a major instrumentation project at the Australian Astronomical Observatory (AAO).

A typical time-lapse approach is to take photos at fixed intervals for the duration of whatever process you’re trying to capture.  The AAO’s assembly schedule for HERMES, a high resolution astronomical spectrograph, didn’t lend itself to this approach for three reasons: i) nothing was going to happen on evenings or weekends; ii) there would be many ‘dead’ periods when work was being done outside of the main assembly area and therefore out of shot; and iii) it would go on for a year, which meant camera shutter life might have become a limiting factor.  What I needed was for photos to be taken only when work was being done, and to do so at short intervals so that these events translated into a reasonable number of frames in the final video.

I decided to use a Passive Infra-Red (PIR) motion sensor to govern when the cameras were triggered.  These sensors are used all the time for outdoor security lights, and they’re super cheap (about $20 from a DIY store).  By using a PIR sensor, the cameras would only fire when someone was in the room, i.e. “when stuff was happening”.

Inside a ‘domestic’ PIR sensor

The plan was to set an intervalometer (timer remote) to fire every 3 minutes non-stop, but with a PIR sensor placed between the intervalometer and the camera.  This way the signal would only reach the camera when the sensor had recently detected motion in the room*.

All a remote shutter release does is short two wires together, so essentially it’s just a single throw switch on a long lead.  There is a third wire too, for focussing or ‘waking’ the camera.  There’s a handy list of DSLR remote pinouts here.

A typical domestic PIR sensor may not be suitable for this job right out of the box.  This is because we want the relay contacts completely isolated from the mains circuit, and many security light sensors assume you’ll be using a common neutral connection for your load.  You can get low voltage PIR sensors though, or you could hack a mains sensor if you know how.  The photo below shows the requisite four connections on my PIR sensor: two for powering the unit via mains, and two which are the relay contacts for switching the remote signal (isolated from mains). 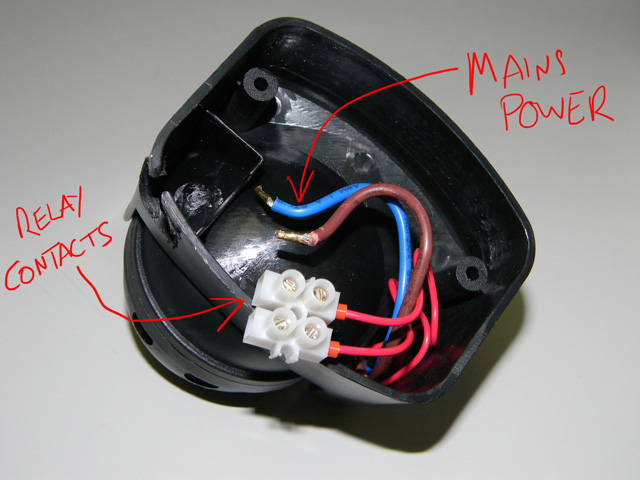 All that remained was to mount the sensor in the assembly area and wire it all up.  For nice cable management I added some jack sockets, and I also split the single trigger line into two because I wanted to trigger two cameras simultaneously. 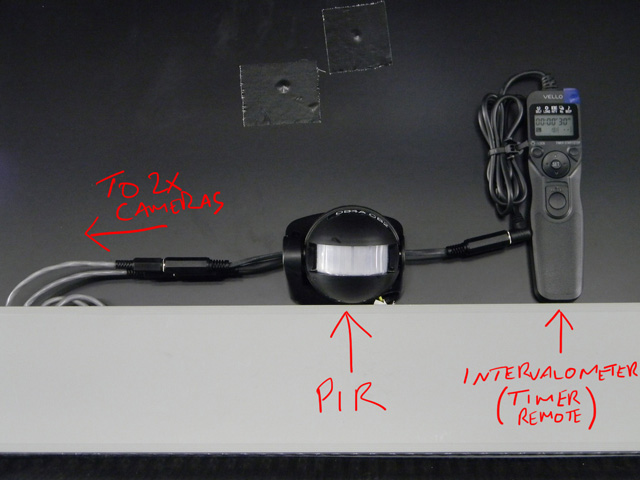 Wired up and in position; intervalometer (right) triggers the shutter every few minutes, but signal only reaches cameras if PIR sensor has recently been activated

Most security light PIR sensors have an adjustment for the light level at which the sensor disables itself (i.e. in the daytime), and also for the duration the security light turns on for.  I maxed out the light level adjustment so the thing would never disable, and I set the duration to about 5 minutes.  This meant that frames would be taken every 3 minutes, but only if someone had been in the room within the last 5 minutes.

This time-lapse setup is working really well for the project at the AAO, but I can see it also being useful for other scenarios where you want a to capture a collection of short dynamic events over very long periods.  Of course you could even do away with the intervalometer and use a PIR sensor to trigger the shutter directly; this way a photo (or maybe a burst of photos) will be taken the moment something is detected.

* Bear in mind that PIR sensors detect the movement of infrared sources.  This generally means stuff that is warmer than its surroundings.  For example:

However a PIR sensor will not detect: